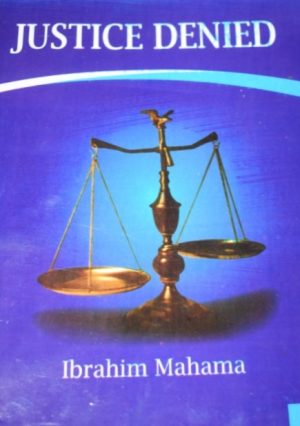 This book was written soon after the suspects of the murder of the Ya-Na were arrested.

The author followed the unveiling accounts of the murder of the Ya-Na,the commitment and indictment proceedings at the Magistrate Court.He also followed the trial of the accused persons at the High Court.

The search for Justice for the Ya-Na became a judicial drama and a political football instead.Some key players in the search exhibited palpable incompetence and nonchalance while others showed unpardonable bias in the performance of their judicial and legal duties. In resistance to the search for justice all kinds of novel and spurious legal arguments were raised ,including the issue of when does a confession have effect in law even if it is freely given?

“Another spurious legal issue raised was the fact of the Ya-Na’s death .In recognition of his service to his nation and traumatic murder, the Republic of Ghana gave Naa Yakubu II a state burial on 10th April,2016. Yet in order to deny him justice and to make the law seem to be an ass,the fact of his death and identity of his body became issues in the trail of persons accused of murdering him.This kept the ordinary Ghanaian wondering where the implementers of the law were taking the country.In the end the Ya-Na was denied Justice”.

6 in stock (can be backordered)

Be the first to review “Justice Denied” Cancel reply