Seeing New Facets of the Diamond: Christianity as a Universal Faith – Essays in Honor of Kwame Bediako 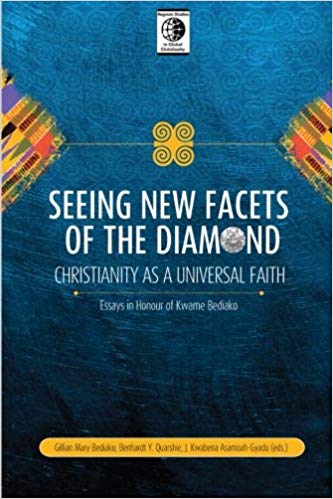 Seeing New Facets of the Diamond: Christianity as a Universal Faith – Essays in Honor of Kwame Bediako

In the five years since Kwame Bediako passed away there has been a growing desire among colleagues and friends to put together a book that would honour his memory.

The title has been chosen to reflect the range of interests and concerns that motivated Bediako’s scholarly work, including his founding and nurturing of ACI, originally named Akrofi-Christaller Memorial Centre for Mission Research and Applied Theology (ACMC), located at Akropong-Akuapem in Ghana. His vision was for the renewal of Christianity as a universal faith, not just in Africa, but also in the non-Western world generally, and with a long-term view to a renewal of the faith in the West. The image of facets of the diamond was his way of describing his vision of the unity-in-diversity that is the biblical mandate for the world church.

Thus, Bediako’s interpretation of the African Christian story, to which he devoted so much of his time and energy – ‘the surprise story of the modern missionary movement’ – was always in relation to the wider Christian story, whether of earlier periods or of other contemporary settings around the world.

This collection of essays has sought to achieve a good representation of mentors, colleagues and disciples from around the world. The contributions come from a variety of countries, theological disciplines and perspectives, and represent either a direct outworking of his vision and initiatives or a connection with them. Taken together, they demonstrate Bediako’s conviction that the theological creativity emerging in Africa is also for the benefit of the mission of the world church. All the essays key into the general theme from contributors’ own particular perspectives and areas of specialisation and capture something of the vision that inspired Kwame Bediako, which he shared, and the legacy he has bequeathed.

In addition, they make a contribution to a deeper understanding of world Christianity in our time and provide pointers to the ongoing scholarly task in the service of the church in mission. For it is vital that we continue to see new facets of the diamond that is the universality of the Gospel, as lived and proclaimed through the world church.

Be the first to review “Seeing New Facets of the Diamond: Christianity as a Universal Faith – Essays in Honor of Kwame Bediako” Cancel reply