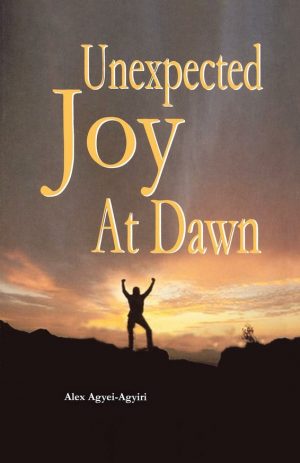 Unexpected Joy at Dawn received a commendation in the Best First Book Prize, Africa Region, of the Commonweath Writers Prize.

‘Fifteen years ago’, Mama said, starting her story, ‘I came to Lagos from Ghana. I came to Nigeria because I was considered an alien in that country. The government of Ghana passed a law asking all aliens without resident permits to regularise their stay in the country. You see, my great, great grandparents had migrated to Ghana several years before, and regarded Ghana as their home…as for the reason possibly, it was because the opposition party then had hyped to monstrous heights that aliens were ruining the country; or the government of the time…blamed their failure to do things right on us ‘alien’ scapegoats… It was difficult to start life all over again, and even more difficult to learn that we were unwanted in a country we had come to regard as our own.’

This story of migration, identities and lives undermined by cynical and xenophobic politics pushed to its logical and terrible conclusion pertains to the Ghanaian orders of ‘alien compliance’ issued in 1970-1971, which was designed to force all non-ethnic Ghanaians, so called illegal immigrants, to return to their – so stipulated – ‘home’. the novel thus touches on concerns of deeper relevance to the politics of race and migration in the twenty first century.

Be the first to review “Unexpected Joy at Dawn” Cancel reply